What is The White Rose?

The White Rose is a world wide network of independent activists, all working in unison to disseminate a much needed counter narrative to the relentless fear mongering, lies and propaganda we’ve all been subject to our whole lives, but especially since day one of the Covid-19 scamdemic.

Have you ever been sitting in traffic, at a set of lights perhaps…..and you see stickers, gig posters, graffiti, etc on the traffic light poles?

I have. That’s how I found about The White Rose. One day in February 2021 I was sitting in my car at a red stop light, and saw this……

I thought to myself what a fantastic idea, and I immediately joined The White Rose on Telegram.

The idea is…stickers. Free stickers. And put them up everywhere. Plant seeds. People do read them.

Join The White Rose main channel on the above link, and check it out.

Once you’ve decided you want to participate, and who doesn’t, stickering is very therapeutic…join the main White Rose chat on Telegram here – https://t.me/thewhiterosechat and follow the instructions to get your free stickers sent to you, anywhere in the world.

But there’s other things you can do too, such as becoming a free sticker distributor in your country. Without the free WR sticker distributors there is no White Rose. They are always needed and there’s distributors in The US, UK, Europe, South Africa, South America, Canada, Australia & New Zealand.

Indeed, Roobs became a WR Free sticker distributor in Australia before he was even a Roobs.

All the instructions on how to become a WR Free sticker distributor are in the pinned posts of the main White Rose channel and chat ( see above links) , but basically it involves buying a cheap Brother label printer, some labels and ink/developer and away you go. You can also print them on other printing machines that can do it, but the Brother printer way is the cheapest and most economical method.

The White Rose has over 55,000 subscribers on the main channel, from all over this Earth. And is extremely effective at producing a response from those who haven’t quite got with the program yet. You know the stickers are working when you put one up, and the next day it’s taken down.

When that happens you put one back up in the same spot, each time it happens….”We have thousands more stickers, Karen”….eventually, they stay there.

I saw one on a crimestoppers sign last year, outside a police station. ( I have no idea who put it there ) It’s still there, so that’s a good sign. Unless the cops are just not that observant at that particular station.

Roobs loves The White Rose, I’m proud to be a part of it and will always be a part of it even if there’s no Roobs Flyers. For that reason we put a full page WR ad on Page 2 of every single edition of our magazine, which coincidentally, you can get here ~ https://roobsflyers.com/roobs-flyers-magazine

Melbourne, Adelaide, Perth, Brisbane and The Northern Rivers also have groups on Telegram but they are private, by invite link only. Join the Gold Coast or Sydney groups and ask admin, politely, for the invite links for the private groups.

Thank you. Join The White Rose.

Where did The White Rose come from, and who is Sophie Scholl?

During the Second World War and also in Germany in the 1930s, there were numerous groups within the country that opposed Adolf Hitler and the Nazi regime. Resistance to the Nazis and Hitler usually was put down rather brutally with those in opposition being sent to concentration camps, or even worse being put to death. One particular group, ‘The White Rose’ lives on today in the memory for being a student group which featured two siblings who died for their beliefs.

Sophie Scholl at the age of 21 would be tragically executed using the guillotine at Stadelheim Prison in Munich. She had been part of the White Rose and had been caught alongside her brother distributing leaflets across Munich University which told people to rise up and defy the Nazis and Hitler. This was an incredibly serious thing, and many of those who practised acts of resistance like this would be sentenced to death for treason. Sophie had been an active part of the White Rose and their spreading of anti-Hitler propaganda, but she was caught.

A pro-Hitler janitor had caught Hans and Sophie Scholl throwing leaflets from a balcony at the University, and for this the Gestapo were called and the siblings arrested. They were placed on trial in a sham-trial, and then sentenced to death for treason. A day after this sentence they were executed, and Sophie’s execution was performed using the guillotine by Johann Reichhart. It took a matter of seconds for the young girls life to be taken away.

Today she is remembered as an incredible and courageous young woman, who defied the tyranny of evil.

THE TRAGIC EXECUTION OF SOPHIE SCHOLL – THE WHITE ROSE: https://www.bitchute.com/video/tV4N2FPgwELy/

Watch: *THE WHITE ROSE* – a short film with Vera Sharav.

“Evil is something that we really need to understand. It’s real.” Vera Sharav pays respects to Sophie Scholl’s grave in Munich, Germany.

Scholl was a German student and anti-Nazi political activist, active within the White Rose non-violent resistance group in Nazi Germany.

She was convicted of high treason after having been found distributing anti-war leaflets at the University of Munich with her brother, Hans. For her actions, she was sentenced to decapitation by guillotine.

‘One wonders, has anything been learned at all?’ asks Vera Sharav, Holocaust survivor, human rights activist and founder of the Alliance for Human Research Protection. 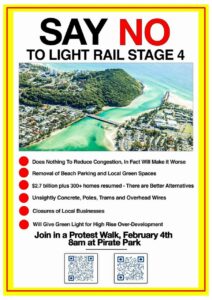 Say No To Light Rail Stage 4

A plandemic of fear and bullshit. CLOVID-19 Contradictions. When trying to catch a liar out, 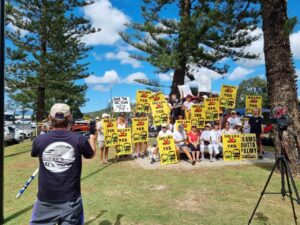 STOP THE LIGHT RAIL – SAVE OUR SOUTHERN GOLD COAST

STOP THE LIGHT RAIL! Stop the light rail on the Southern Gold Coast. Save Our